A look at media coverage of the 2020 election

Brian Stelter is the anchor of “Reliable Sources,” which examines the week’s top media stories at 11 a.m. Eastern Sundays on CNN/U.S, and he is the chief media correspondent for CNN Worldwide. Stelter reports for CNN Business and writes a nightly e-newsletter.

Prior to joining CNN in November 2013, Stelter was a media reporter at The New York Times. Starting in 2007, he covered television and digital media for the Business Day and Arts section of the newspaper. He was also a lead contributor to the “Media Decoder” blog.

Stelter published The New York Times best-selling book, “Hoax: Donald Trump, Fox News, and the Dangerous Distortion of Truth” in fall 2020. It tells the twisted story of the relationship between President Trump and Fox News. Over the course of two years writing the book, Stelter spoke with over 250 current and former Fox insiders in an effort to understand the inner workings of Rupert Murdoch’s multibillion-dollar media empire.

In 2013, he published The New York Times best-selling book “Top of the Morning: Inside the Cutthroat World of Morning TV” about the competitive world of morning news shows. He is a consulting producer on Apple’s drama “The Morning Show,” inspired by his book.

In 2020, Stelter was executive producer for the HBO Documentary “After Truth: Disinformation and the Cost of Fake News,” directed by Andrew Rossi, who featured Stelter in his 2011 documentary, “Page One: Inside the New York Times.” Stelter was also named to Forbes Magazine’s “30 Under 30: Media” for three consecutive years, and Fortune Magazine’s “40 Under 40: Media & Entertainment.”

In January 2004, while he was a freshman at Towson University in Baltimore, Maryland, Stelter created TV Newser, a blog dedicated to coverage of the television news industry. He sold it to Mediabistro.com in July 2004 but continued to edit and write for the blog during the next three years until he graduated with a bachelor’s degree in mass communications with a concentration in journalism.

He is on the board of Baltimore Student Media, a nonprofit that publishes Towson University’s independent student newspaper, The Towerlight.

Journalists are the watchdogs of society. It is our job to tell the  truth and share it with the public. The current administration has launched a visceral attack against members of the media, in an attempt to intimidate us and keep us from doing our jobs. Now, more than ever, it is important for us to embrace our roles as primary sources documenting the history of this country and this world. Storytelling is a revolutionary act, now more than ever.

Monique Judge chose journalism as a second career in 2011 and hasn’t looked back since.

She studied at El Camino College, where she served as a featured columnist for three semesters, as well as the opinions editor for The Union newspaper for four semesters.

She continued her studies at Arizona State University in the Walter Cronkite School of Journalism and Mass Communication, where she majored in mass communication and media studies. She is an advocate for truth, justice, media literacy and the humanity of Black Lives. 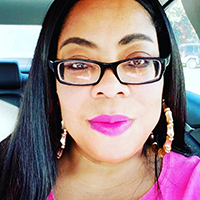